Are Cyber Tires the Wave of the Future? 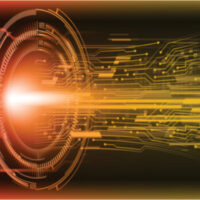 What if a tire could send reports of a potentially dangerous road condition to other cars on the road in real-time? That’s the future of tires according to one company, Pirelli Cyber Tire, who is developing a 5G tire that can communicate directly with other vehicles.

Pirelli demonstrated the technology while the vehicle was in motion. The tire was able to sense that there was a slip hazard on the road as it drove over water and sent a message to another vehicle that was capable of receiving it.

The technology, known as V2X (vehicle to everything) is not necessarily new. However, its adaptation to tires is quite an innovation. While the majority of cars out on the market today do not have V2X technology installed, let alone smart tires, the future looks very bright for those who have developed the technology.

V2X Tech is in the Early Stages of Development

V2X technology gives cars the ability to “talk” to other vehicles, infrastructure, and more. In terms of tires, this information can be used to warn other cars about dangerous road conditions, slip hazards, and potentially dangerous potholes. It also could put local municipalities on warning that there is a threat to motorists in the area while simultaneously pinpointing the location. Cars can already communicate with traffic signals to inform drivers how long they will have to wait until the light turns green. This technology is featured in some Audi models that on sale now.

Meanwhile, Pirelli is working on ways to make their current 5G smart tire system more complete. While communicating potential road hazards to other vehicles and municipalities is a great start, Pirelli is hoping their tires can do much more. This can include calculating miles on a trip, load hauls, and more. And hopefully, it can tell drivers if they have a small leak as well.

Right now, the most significant innovation of this new smart tire technology is the ability to improve a driver’s reaction time by communicating potential road hazards before they occur. This is no small feat. If a slip hazard like black ice occurs somewhere down the road, the ability to slow down before the car skids out can prevent numerous accidents before they happen.

While Florida isn’t necessarily known for icy roads, it is known for dangerous roads. Our state has some of the most dangerous driving conditions of any state in the country and there are more accidents annually here than the vast majority of other states. With any luck, innovations like the Pirelli Cyber Tire will be able to reduce the number of accidents and improve the safety of other drivers on the road.

If you’ve been injured by a defectively manufactured tire or believe that may be the case, the Coral Gables tire defect attorneys at Halpern, Santos & Pinkert can conduct an investigation into the cause of the tire failure and help you build a case against the manufacturer. Talk to us today for a free consultation.