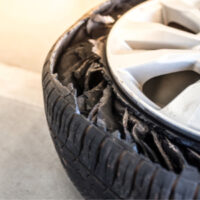 A Chicago-area man was killed and two other individuals were injured after the back tire burst in his SUV, according to police. The man was driving a 2020 Dodge Durango causing the driver to lose control of the vehicle. He veered off the road and onto the sidewalk where his vehicle struck a light pole and a tree. One of the driver’s passengers was pronounced dead at the scene.

The 22-year-old driver managed to escape with injuries to his face, but a 15-year-old passenger had to be transported to the hospital in critical condition. The crash is under investigation by police, but police said that none of the passengers appeared to be wearing their seatbelt.

Analyzing the Evidence from This Incident

While we don’t know much about the situation surrounding the crash, we can safely that the tire on a 2020 Dodge Durango was not worn out by the road. This was likely a situation where either the tire itself was defective or the tire was defectively installed. Liability could fall on the manufacturer of the tire in this case.

But what about the fact that none of the passengers were wearing their seatbelts at the time of the crash. Wouldn’t they have survived the accident had they been wearing their seatbelts? That is precisely the argument that the defendant in a potential lawsuit would make. It would be an effective argument because it would reduce their liability, but it wouldn’t absolve them of liability entirely if they allowed a defective tire to enter the stream of commerce.

In Florida, this is known as comparative negligence. Both plaintiff and defendant can be assigned some of the blame for an accident and the plaintiff would be able to recover their total damages minus their own percentage of the blame.

So in a case like this, let’s say the family sues and recovers $2 million in a wrongful death lawsuit, but the jury decides that the plaintiff is 50% responsible for the accident. The family would still be able to recover $1 million which is obviously a considerable sum of money.

While we can’t say for sure that the tire was defective or that the tire manufacturer is liable, it certainly doesn’t appear that the driver is liable—at least for the tire problem. While winter drivers know that they need to keep their tire pressure higher in winter because tires lose pressure in the cold, the mere fact that the model of the vehicle was a 2020 seems to indicate that the driver did not have a reasonable expectation that they would have to service the vehicle or its tire.

If you’ve been injured in an accident related to tire failure, the Coral Gables tire defect attorneys at Halpern, Santos & Pinkert have the experience you need to litigate a claim against the manufacturer. Talk to us today to schedule a free consultation.