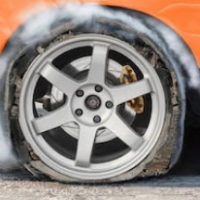 An Oregon Court of Appeals ruled that a lawsuit involving an exploding tire can move forward. The case was originally dismissed by a Circuit Court judge. The Appeals Court ruled that dismissal was based on an erroneous interpretation of federal law.

The Story of an Exploding Tire

Scott Wilcox and his wife Jenna were on leave in the UK. He had his Mercedes shipped to the UK while he was stationed in England and was driving it when they heard a rattling that appeared to be coming from the tires. Scott replaced the rear passenger-side tire with a spare. They went off to search for a replacement. Jenna put the misbehaving tire in her lap during the journey instead of leaving it on the side of the road. That’s when the tire exploded.

According to the lawsuit, Jenna suffered head trauma, a lacerated liver, and a fractured vertebra. She would later die of these injuries in 2010.

The Case is Dismissed

Each state has a statute of limitations determining how long a plaintiff has to bring a lawsuit against a negligent party. In Oregon, a plaintiff has three years to file the lawsuit. Jenna Wilcox died in April of 2010 and Scott Wilcox filed the wrongful death lawsuit against Les Schwab Tire Centers of Oregon Inc. and Toyo Tire Holdings of Americas Inc. in 2014. Because the statute of limitations had lapsed, the court dismissed the case.

However, U.S. law permits what is known as “tolling” of the statute of limitations for active duty servicemembers. This is known as the Servicemembers Civil Relief Act. On appeal, the judge determined that the statute of limitations should have been tolled until Scott Wilcox had ended his service with the military. Wilcox was relieved from active duty in 2011 which meant that the clock should have begun ticking down then and not after his wife’s death. The judge determined that the Servicemembers Civil Relief Act applied to the lawsuit that Scott Wilcox filed and the case should be tried on that basis.

It is currently unclear what caused the tire to explode in the lap of Jenna Wilcox. However, the mere fact that it did is enough evidence that the companies responsible for manufacturing the tire should be held responsible.

In cases of product liability, plaintiffs are not obligated to prove negligence. It is assumed that the manufacturer of a product has a duty of care to their customers and that if their customers use the product in the intended way, the company is liable for their injuries.

The attorneys at Halpern, Santos & Pinkert in Florida hold tire companies responsible for defects in their products. Give us a call or talk to us online to set up a free consultation.