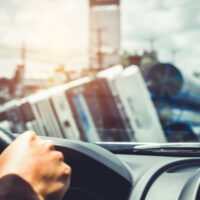 A woman who was involved in a major pile-up that cost ten people their lives has filed a lawsuit against two trucking companies that were involved in the accident. Eight of the deceased were children traveling in a van. The lawsuit was filed on behalf of the driver of the van who was seriously injured in the accident. The families of the eight deceased children have also filed wrongful death lawsuits naming the driver of the truck and his company for the negligence.

The van carrying the children was traveling alongside a trailer. Both vehicles were positioned behind an 18-wheeler. All three vehicles were coming up on a crash site and traffic had begun to slow. The trailer located adjacent to the van failed to slow in time and veered their vehicle into the van’s lane. The van then crashed into the 18-wheeler that was in front of it. The ensuing collision caused an explosion which resulted in the van being engulfed in flames. The fire spread quickly to both trucks and to other cars involved in the pile-up.

Bystanders were able to pull the woman from the wreckage even as she tried to save the children, two of which were her own. She managed to survive, but not all of the children did.

Lawsuits have been filed against both trucking companies involved in the accident. However, the first in the chain was the adjacent truck, so that will likely be where the majority of liability is placed.

It’s not entirely clear what, if any, negligence the leading tractor-trailer contributed to the accident. Personal injury attorneys tend to name any possible individual defendant just to ensure that they can pursue the matter using legal means. In this case, it looks like the leading trailer may be just another victim of the trailer behind him.

The tractor-trailer that was adjacent to the plaintiff’s van failed to slow for traffic in time despite seeing that traffic was slowing ahead of him. This is a very simple case of distracted driving. The driver’s attention was split between the road and something else causing him to react too late, smash into an SUV, veer into the left lane, and end the lives of 8 children. Since it was not the tractor-trailer that was directly in front of him, it’s hard to see how the other driver could have contributed negligence. Typically, one could allege that their brake lights were out which caused the trailing driver to not realize that they had to stop. That wasn’t the case here. It is likely that the charges against the leading driver will be dismissed or voluntarily dropped.

The fate of the other driver, however, is much less comfortable. He will have to provide urine and blood samples to ensure that he wasn’t under the influence at the time of the crash and may still be held liable for criminal charges if his negligence resulted in 8 deaths. Plus, he and his company likely owe several families wrongful death settlements.

If you’ve been involved in a traffic accident with a large commercial truck, the Coral Gables tire defect attorneys at Halpern, Santos & Pinkert can help you file a claim. Call today!