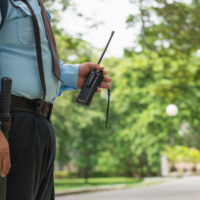 A security guard at an upscale gated community in Las Vegas lost his life as he was trying to help a delivery truck driver back out of a spot. The family of 61-year-old Mark Streit has filed a wrongful death lawsuit against RC Wiley for whom the delivery driver worked for and the gated community. The driver of the truck was also named in the lawsuit.

The lawsuit includes a letter sent by one of the residents detailing the dangerous conditions of the gated community. The letter details several problems at the gate and the surrounding area that helped contribute to a very dangerous situation.

The Contents of the Letter

According to the letter, which was sent the same day that Streit’s widow filed her wrongful death lawsuit against the three defendants, the guard was overwhelmed at the gate since the community only permits one entrance. At the same time that he was trying to accommodate the residents, the company that maintained the community was doing a significant amount of roadwork which caused more traffic at the gate than one guard could handle.

At some point, the delivery truck attempted to get through the gate, but the truck was too large to fit. Streit attempted to clear traffic behind the truck. There is then conflicting information as to what happened next. A newspaper article stated that Streit fell for an unknown reason just before he was hit. The lawsuit states that the truck hit Streit and then backed over him. The driver of the truck and another employee are both accused of failing to assist once it was obvious that Streit was injured. These actors are being blamed for maliciously withholding aid while the guard died. The plaintiffs will be arguing for punitive damages in this case.

Punitive damages are awarded to plaintiffs to punish defendants for actions or inactions that are particularly black-hearted or egregious. We don’t know specifically what happened, but the company that employed the driver who struck the security guard is being targeted for punitive damages by the plaintiffs. Plaintiff’s attorneys work only on allegations. It’s our job to believe our clients and then advocate for their interests. If two employees of RC Wiley failed to render aid after striking the security guard, punitive damages would indeed be appropriate. Proving that claim will involve witnesses to the accident detailing what happened directly during and then after the security guard was struck.

However, the case can prove difficult if there were no other witnesses. It would be difficult to prove that the men failed to render aid immediately after the incident occurred. Nonetheless, it’s likely that the driver was negligent when he struck the security guard. The gated community also created the conditions under which the security guard’s life was placed in danger. So this lawsuit is winnable.

If you’ve been injured in an accident with a commercial truck, call the Coral Gables tire defect attorneys at Halpern, Santos & Pinkert today to schedule a free consultation and learn more about how we can help.