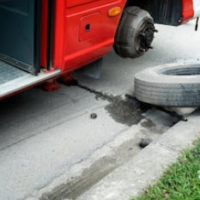 A bus heading to New York caused a major accident after both wheels came off the left side causing both the tires and the rims to dislodge and head into traffic. The tire, laying flat in the center lane, was hit by a tractor-trailer which spun out of control, crashed, and then erupted into flame. The scene occurred on the I-95 interstate at about 3 in the morning. A second crash occurred later when a different tractor-trailer slowed down to avoid debris from the first crash. While there were no injuries in the second crash, the driver of the tractor-trailer that hit the tire had to be taken to a nearby hospital.

The bus driver was blamed for the accident and charged with operating a defective vehicle. Somehow, none of the passengers on the bus were injured when the wheels came off. The Virginia Department of Transportation was forced to shut down traffic on the I-95 for three hours after responding to the scene, ostensibly to clear away debris and to ensure everyone was safe.

Police on the scene attributed the crash to the lugnuts loosening on both of the left side tires. What is less apparent is how they both came off at the same time. More than likely, the owner of the bus or the company for which he works, failed to secure the wheels properly to the axle. This resulted in the wheels coming off the bus and the debris which caused the accident with the tractor-trailer.

Is the Bus Company Liable for the Truck Driver’s Damages?

The truck driver may counter by claiming that there is no reason to be on the lookout for stray tires in the middle of the road and that the supreme negligence of the bus driver who allowed passengers to board without checking his tires is enough to warrant the ‘gross negligence’ standard required to collect punitive damages. Since the driver has been charged with operating an unsafe vehicle, it will make it much easier for the truck driver to target the bus driver and his company in a lawsuit.

Halpern, Santos & Pinkert in Florida represent those injured in defective tire lawsuits. Talk to us today and we can set up a free consultation during which we’ll go over your case and lay out your options.