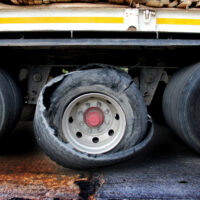 The accident, which occurred in Ontario on the QEW, underscores the need for safe tires.

What Caused the Tire Blowout?

Dump trucks are responsible for hauling multiple ton loads from one place to another. They often carry very dense and heavy materials. This increasing the rate at which the tires wear down. Tread wear on a dump truck happens much more quickly than it would on a typical commuter vehicle.

The video also shows how violent and dangerous the accident could have been. Luckily, no one (not even the dump truck driver) was injured in the crash. But had their been a vehicle in the lane directly left of the dump truck, that vehicle would have also been pushed into oncoming traffic. This could have created a collision between oncoming traffic and the vehicles that had jumped the divider. Serious injuries and fatalities could have occurred.

Why Did the Tread Separate?

Treads separate for a number of reasons. Sometimes, it’s a manufacturing defect in the tire itself. This can cause a newer tire that is still under warranty to blowout while the vehicle is in motion. That ends up being the tire company’s fault.

What Happens During a Tire Blowout?

The dump truck was on the QEW, so we can safely assume that it was traveling at highway speeds. Once the tire blows out, the vehicle begins pulling in the direction of the blowout. The driver will either attempt to slam on the brakes or correct the course by swerving in the opposite direction. Neither is recommended, but it’s our natural instinct. This generally results in the vehicle flipping over or crashing into a guard rail. In this case, it was both.

If you believe that a tire blowout contributed to your traffic accident, call the Coral Gables tire defect attorneys at Halpern, Santos & Pinkert today to schedule a free consultation and learn more about how we can help.