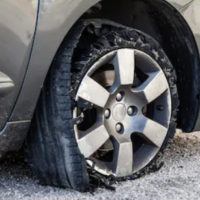 The Virginia Supreme Court was forced to answer a question related to exploding tires recently. The Supreme Court ruled that an insurer was under no obligation to indemnify the truck stop where injuries occurred during an exploding tire incident. The Doswell Truck Stop, LLC was insured by Virginia-based insurance company James River Insurance Co. Doswell had a general commercial liability policy that covered them in the case of liability suits.

James T. Smith, who had stopped at the truck stop to have repairs done to his tractor-trailer, was invited by one of the employees into the garage. The tire, which was a multi-rim tire and prone to violent explosions if not handled properly, did, in fact, explode. Although the tire was placed in an OSHA-compliant steel cage as required by law, the employee over-inflated the tire and this caused it to explode. Smith filed a personal injury lawsuit against the truck stop.

In return, the truck stop filed a claim with its insurance company, which denied the claim based on an auto-maintenance policy exclusion.

The Lawsuit against the Insurance Company

The Supreme Court ruled that the term “maintenance” was not ambiguous and, in fact, could only be applied singularly given the contract. In other words, there was only one interpretation that made sense under the terms of the policy.

This frees up Smith, who was injured on the premises, to sue the truck stop directly. It also frees the truck stop’s insurance company from paining out on the claim related to the incident.

Does this Ruling Make Sense?

On the one hand, when the truck stop had its lawyers go over the policy, they were no doubt thinking that insurance related to truck maintenance involved defective services that caused accidents or injuries on the road. They were likely not thinking of individuals being injured on their premises. The terms of the insurance policy were ambiguous.

In most cases, a situation like this should never occur because the maintenance crew should have never allowed the customer into the garage where the mechanic was performing a dangerous inflation of a dangerous tire. They have probably learned their lesson and will not be inviting future customers into their garage.

As a result, the truck stop will have to dip into its own coffers in order to payout the injury claim suffered by the trucker.

If you’ve been injured by an exploding tire, the Coral Gables tire defect attorneys at Halpern, Santos & Pinkert can help you recover damages related to your injuries. Talk to us today for a free consultation.