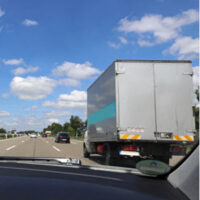 The family of an Austin police officer has filed a wrongful death lawsuit against a trucking company and their driver after a fatal accident. The officer collided with the semi after the truck attempted to make a U-turn in front of his patrol car. According to an attorney representing the family, the driver made an unsafe and illegal U-turn which resulted in the officer’s death.

The two vehicles were headed in the same direction when the accident occurred. The vehicles approached a railroad crossing and the truck driver noticed that the arm was down. Instead of waiting for the train to go by, the truck decided to head in the opposite direction and pulled a U-turn, which blocked four lanes of traffic.

The lawsuit says that the officer did not have enough time to respond to the sudden U-turn attempt, and the front part of his vehicle was crushed beneath the corner of the back of the trailer.

Texas has recently passed legislation that changes the way truck accident lawsuits are handled. An attorney for the plaintiff said it was important to file the lawsuit before that legislation goes into effect. The new law requires that the trial be bifurcated (cut in two parts). First, there must be a finding of negligence. The jury, before they even hear who the name of the defendant is, must decide whether or not the truck driver was negligent. Once the truck driver has been found negligent (if the truck driver is found negligent), then the second phase of the trial begins, one which establishes damages. At this phase of the trial, the plaintiffs are allowed to bring in evidence concerning the truck company’s past transgressions or their driver’s prior accidents.

The idea behind the bifurcated trial is that jurors don’t like trucking companies very much after they’ve been responsible for a growing number of deaths, especially in Texas. This has resulted in “nuclear” verdicts against trucking companies that supposedly make their business model less sustainable. Since we need a supply chain to get goods from one place to another, protectionist efforts to prevent the trucking industry from becoming less profitable are now being put in place. However, those who drafted the law never imagined that a police officer would be a plaintiff in a lawsuit against the trucking company. They always seem to imagine greedy money-grubbing poor folks looking for an easy way up the ladder.

The Coral Gables tire defect attorneys at Halpern, Santos & Pinkert file lawsuits on behalf of motorists injured by negligent truck drivers and trucking companies. Call today to schedule a free consultation and learn more about how we can help.