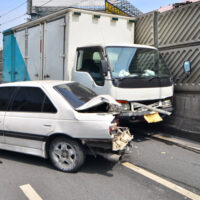 A federal judge halted a lawsuit against a trucking company whose driver was involved in an accident that took the lives of six people. The attorney, who is representing four of the six estates, sent a press release to the media in violation of a rule issued from the bench. The federal trial judge halted the trial.

The incident occurred in 2015 and the driver of the truck was convicted in 2018. A civil trial was set to begin before the attorney representing four of the plaintiffs issued a press release. The court said that the press release violated a local rule of conduct in Tennessee’s Eastern District. The trial will now face a delay as the potential impact of the press release recedes into memory.

The company named in the lawsuit hired a driver who was high on meth at the time that he caused a multi-car accident that killed six people and injured several more near a highway exit. According to the family, the driver was hired only ten days before he caused the accident. The plaintiffs say that the company failed to perform a background check on the driver or review his five-year driving history. The driver was sentenced to 55 years behind bars for six manslaughter charges and numerous other injuries as well as DUI and related offenses.

The company is liable for the conduct of their driver, and they should be, they’re the ones who hired him. While the plaintiffs don’t have to prove that the company was negligent, in this case, they’ve decided to make that argument anyway. It’s likely that they are pursuing punitive damages against the company.

Here, such an argument may hold a great deal of weight. Since the company rushed to hire a driver they never vetted, the plaintiffs will argue that even the minimum of due diligence would have been required to find a better driver. While the article doesn’t state what information they would have found had they conducted a background check, one would guess that the plaintiffs’ attorneys have at least some juicy dirt. At least enough to prove that a background check would have prevented the company from hiring the driver and thus prevented the accident.

If you’ve been injured in an accident with a semi-truck, you may be able to recover damages related to your injuries. Call the Coral Gables tire defect attorneys at Halpern, Santos & Pinkert today to schedule a free consultation and learn more about how we can help.