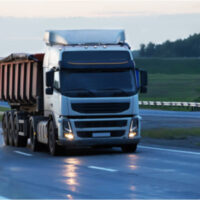 A dump truck driver operating a 1981 Chevrolet C-70 dump truck tragically lost his life traveling along a Kentucky interstate. Investigators believe that the truck was traveling around 70 mph when the crash occurred. The driver was heading back to his place of business when the truck experienced a catastrophic tire failure. The vehicle, which had recently been purchased at an out-of-state auction, experienced a driver’s side steer axle tire failure while the vehicle was traveling at 70 mph.

As the accident was occurring, the driver attempted to compensate for the pull by oversteering but was not able to retain control of the vehicle. The vehicle trundled over the median and came to its final resting spot in an embankment.

Contributing Factors to This Accident

Typically, instead of having one cause, accident reports list several contributing factors. While this is useful because it provides a complete picture of the forces that came together to cause the accident, it is important to remember that some contributing factors contributed more than others.

The second factor was the lack of a barrier separating the two lanes of traffic. This is a factor because, had the driver struck a median instead of bounding over a grassy knoll, he may still be alive. Instead, the driver hit an embankment on the other side of traffic.

Lastly, failure to wear a seatbelt may have been a key factor in the driver’s loss of life. This is especially true because the driver was driving a vehicle that he was unfamiliar with having recently purchased it from an auction. We don’t know if the driver would have survived the accident had he worn a seatbelt, but we do know that the driver died of multiple blunt force traumas exacerbated by not wearing a seatbelt.

The primary or first cause of the tire accident was the first thing that happened in the chain: The tire failure. It’s unlikely that a suit against the tire manufacturer will yield much since the truck was nearly 40 years old. It is more likely that the truck simply had old or worn-out tires. Nonetheless, the auctioneer failed to warn the purchaser about potential dangers, but common sense tells you that’s the first thing you should look at when buying a new (especially commercial) vehicle.

If you’ve been involved in an accident related to tire failure, the Coral Gables tire defect attorneys at Halpern, Santos & Pinkert can help you file a claim and hold the negligent party accountable for your injuries. Talk to us today and schedule a free consultation.