Jury Finds in Favor of Michelin in Tire Blowout Lawsuit 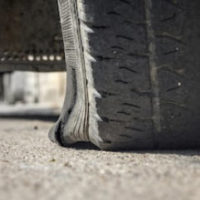 A recent verdict did not go the plaintiff’s way after the jury returned with a unanimous verdict in favor or Michelin North America and Takata Corp. The plaintiff, Stevette Dukes, claimed that the Michelin tire on his 2005 Chevy Trailblazer blew out and the Takata seat belt he was using contributed to his life-changing brain injuries.

The Trailblazer was traveling along the I-95 when the tire blew out causing the vehicle to roll over multiple times. Two teenagers in the back seats sustained serious injuries after they were ejected from the vehicle, ostensibly while wearing Takata seat belts. The theory that the plaintiff’s presented as to how the seat belts became unlatched involved the teen’s elbows somehow hitting the latch causing the belts to become undone and ejecting the teens during the rollover. Takata argued convincingly that this never happened and the reason why the teens were ejected from the vehicle was simply that they were not wearing seat belts, which, if we’re all being honest is more likely than phantom elbows causing the belts themselves to unlatch.

The second part of the lawsuit involving the tire blowout seemed much more winnable. However, Michelin was able to present evidence that the tire was damaged and then resold to the plaintiff. Michelin also provided evidence to the court that the Trailblazer should have still been controllable even if the tire blew out and that the loss of the control of the vehicle was the driver’s, not Michelin’s, fault.

If the Michelin tire was resold after it had been damaged then the plaintiffs may still have a case against the store that sold them the tire. In cases like this, Michelin can’t be held responsible for what someone does with their tire after it has left the stream of commerce.

However, the second attack against the plaintiffs is problematic. When a tire blows out, particularly at high speeds, there’s no perfect way to react. In the majority of cases, the driver will lose control of the vehicle and this can result in rollover accidents. The argument that the driver should have been able to maintain control of the Trailblazer is absurd. Since the plaintiffs were driving on a highway, one can reasonably assume they were driving at least 65 mph. If your tire blows out at that speed, you’re more than likely to lose control of your vehicle.

However, arguments such as these are precisely what you should expect if you’ve suffered an injury due to a defective tire. The company that manufactured the tire will lay the blame at your feet and blame you for the accident.

While the plaintiffs still may have a case against the store that installed the tire (assuming that Michelin presented convincing evidence that the tire had been resold after being damaged), their case against Michelin is over and this at least in part can be attributed to how bad their argument against the Takata seat belts was. Once you’ve insulted a jury’s intelligence, it’s very difficult to win them over.

If you’ve been injured by a defective tire, the Coral Gables tire defect lawyers at Halpern, Santos & Pinkert can help you recover damages. Give us a call to set up a free consultation immediately.