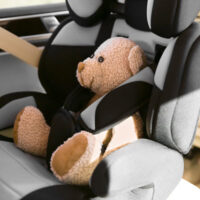 Britax Child Safety, one of the foremost manufacturers of child safety seats in the nation, is facing a lawsuit filed by the parents of a child who died in one of their car seats. The parents allege that the child safety seat was designed defectively which made the seat not “crashworthy”. In other words, the seat was not designed to protect a child in the event of a crash. Since these seats are marketed as safe alternatives to simply strapping your child into the backseat, the manufacturer of the product may be liable for the boy’s death. In this article, we’ll take a look at their case.

Allegations made against the child safety seat industry

It’s not necessarily apparent, judging by the article, how the child safety seat failed in the accident. Essentially, the attorney representing the plaintiff says that the child safety seat failed in this accident and that the company advertises their child safety seats as performing “above average” in crash tests. The article only says that the car seat sustained a “structural failure” causing the child to suffer catastrophic injuries. The plaintiffs seem to be saying that the harness system is unable to withstand front-end crashes of a certain magnitude of force. According to the manufacturer, their car seat had the “highest safety score” of all seats designed with a five-point harness.

In 2018, Consumer Reports performed crash tests of their own and found the claims made by the manufacturer to be lacking. Their crash tests indicated that the car seat sustained structural damage during certain types of collisions and that the harness could loosen. This particular car seat was retired from Britax’s lineup.

So specific allegations against the car seat used in the accident that resulted in the death of a child are currently lacking, but there is enough circumstantial evidence surrounding the case to believe that something like this could have happened. Nonetheless, attorneys for the plaintiffs will need to requisition information concerning what Britax knew and when. If these car seats had a propensity to fail in a similar way, Britax may be on the hook for punitive damages for mismarketing their product.

The Coral Gables tire defect attorneys at Halpern, Santos & Pinkert represent plaintiffs in lawsuits concerning defective components or vehicles that malfunction and lead to accidents. Call our office today to schedule a free consultation and learn more about how we can recover damages related to your injuries.