Man Dies in Fiery Crash on I-84 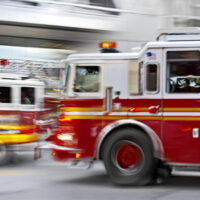 One man died in a serious accident that resulted from a tire blowout. The victim, 72-year-old David Harp of Orange County, was pronounced dead at the scene. The crash took place outside the town of Montgomery.

Harp was driving a Mack truck at the time. The truck experienced a tire blowout causing the vehicle to exit the road on the right shoulder. It had enough speed to traverse the grassy area and find its way 1,000 feet into a wooded area where it struck several trees and then burst into flames.

The investigation into the crash is ongoing, so we don’t know what caused the tire blowout.

What is the most likely explanation? In a majority of situations, the tire failure is caused by operator error. The truck driver is expected to conduct inspections on his vehicle after every 24 hours on the road. Additionally, truck companies are expected to perform diagnostics on their vehicles before delivery. These inspections include the tires. In many cases, a failure to perform this routine maintenance results in a tire blowout. Many of these accidents will be fatal.

A second investigation will be conducted into the tire itself. In most cases, there will be evidence that the treads separated from the tire casing which resulted in the rapid loss of inflation. There can be several reasons why the tire experienced tread separation.

The most common reason for tread separation is improper inflation. It is crucial that tractor-trailer tires are inflated properly. Underinflation can cause the tires to droop at the bottom slowly eroding the adhesion between the treads and the radial belt. Overinflation causes too much pressure to build up inside of the tire resulting in the weakening of the tire casing.

It is also true that many of these tires are retreads. Retreads are used by the trucking industry to reduce the costs related to replacing tires. Tires can be retread only if the tire casing is still strong. It makes sense for trucking companies to retread tires because they wear through the treads much more rapidly than commuter vehicles. The process of retreading is generally safe, but it is also complicated and must be done by trained professionals. It sometimes happens that these retread tires weren’t retread properly and that resulted in the accident.

If a defective tire was implicated in your traffic accident, the Coral Gables tire defect attorneys at Halpern, Santos & Pinkert can conduct an investigation of the incident and determine if there is a liable party from whom you can collect damages. Call today to schedule a free consultation.