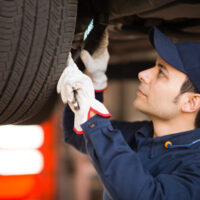 Meineke paid $12.5 million to settle a lawsuit brought about by a woman who claimed that the facility failed to catch a problem with her tire. The tire blew out causing a crash that nearly killed the woman two days later. Meineke had told the woman that her tires had been inspected.

In rare cases, tire blowouts are the result of a failure to inspect the tires properly. Generally speaking, any individual who operates a motor vehicle on the road is responsible for the roadworthiness of their vehicle, including the tires. If you cause an accident because an old tire blew out, then it’s your responsibility to make restitution to anyone else who was injured, including your passengers.

However, sometimes, other parties can be held liable for the accident. In this case, the plaintiff had a reasonable expectation that her tires had been checked and were in good condition since the staff at the auto repair shop told her that was so. She drives her vehicle on a dangerous tire and almost dies as a result of the ensuing accident. Meineke settled the lawsuit for $12.5M and couldn’t even negotiate a gag order on the settlement.

Tire blowout accidents are among the most deadly. When a tire blows out, the driver will almost certainly lose control of the vehicle. Their first instinct will be to turn the wheel in the opposite direction that the car is pulling. This almost always results in a turnover accident. That was the case with the aforementioned plaintiff. Her vehicle flipped over several times and she was thrown from the interior.

As a result of the accident, she suffered a traumatic brain injury and one of her legs was crushed meaning that she will be confined to a wheelchair for the rest of her life.

The woman was probably thrown from her vehicle and ended up outside of the vehicle because she wasn’t wearing her seatbelt. While her own negligence does not erase the negligence of the auto repair shop that failed to inspect her tires prior to telling the plaintiff that her tires were inspected, it could reduce her total damages.

If a tire blowout resulted in serious injury, call the Coral Gables tire defect attorneys at Halpern, Santos & Pinkert today to schedule a free consultation and discuss your injuries in more detail.