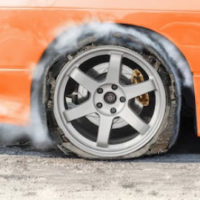 The Outlaw motorcycle helmets had been the subject of a recall, but the judges found that the plaintiffs had not established that their injuries were made more severe due to the helmet’s failure.

According to the plaintiffs, the accident occurred when the rear tire of their motorcycle blew out. Mary Timms, was thrown from the motorcycle and her husband, Donald Timms, was dragged down the street. Both Timms suffered severe injuries as a result of the accident.

The helmet lawsuit was tossed because the Timms failed to provide the court with expert testimony concerning the helmet’s defect and their injuries. However, they did provide expert testimony concerning the rear tire. The Timms asserted that the rear tire leaked air causing it to unseat from the rim. This resulted in the blowout that caused their injuries. They sued Goodyear, who manufactured the tire, and Harley Davidson for failing to provide a tire pressure monitoring system.

The judges determined that the expert testimony provided by the Timms wasn’t credible and ruled that the Timms lacked any scientific basis for asserting that the tire or the lack of a TPMS contributed to their injuries.

In this case, the Timm’s case was doomed by a lack of credibility of their expert witnesses. Had the Timm’s been able to provide a confidence-inspiring scientific basis for determining that the tire led to the accident, their case against Goodyear might have been successful. Still, it’s interesting that the court ruled on a matter of fact and then dismissed the lawsuit. The court is able to do this when the Timm’s case is built on dubious expert testimony.

That begs the question: Why weren’t the Timms able to get a better expert witness? It could be that no expert was willing to champion their cause. In this case, the fact that the tire never deflated completely or lost air probably hurt them. Alleging that the tire unseated from the rim was too close to speculation for the court to allow the testimony.

If you’ve been injured by a defective tire, the Coral Gables tire defect attorneys at Halpern, Santos & Pinkert can help you recover damages related to your injuries. Talk to us today to set up a free consultation.