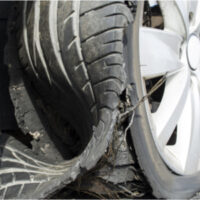 A fatal accident occurred in January at 12:15 p.m. about two miles north of Palm Coast Parkway. Fifty-one-year-old Ricardo Mosquera of Orlando was driving his 20-year-old motor home when the front passenger-side tire blew out causing him to lose control of the vehicle. He was traveling with his wife, Yvette (49) and two other relatives who were sitting in the back. The group was headed to a St. Johns County campground.

When the tire blew out, the motorhome was in the right lane. The vehicle began pulling toward the shoulder where it hit a road sign and then struck two trees in rapid succession. The second impact caused the motorhome to break apart. Yvette Mosquera and one of the passengers in the back were pronounced dead at the scene. Ricardo Mosquera suffered serious injuries and the other passenger was treated for minor injuries.

Whenever you hear the terms “motorhome” and “tire blowout” in the same sentence, the first thing that should pop into your mind is Goodyear’s G159 tire. This tire has made headlines over the past decade for a series of accidents related to its performance on motorhomes.

The G159 was originally designed for urban delivery vehicles like the ones that UPS uses. However, it was marketed for RVs as well and that’s where it ran into trouble. The failure rate for G159s on motorhomes was excessive and several people have died in accidents related to the G159 on motorhomes.

Unlike urban delivery vehicles, motorhomes travel large stretches of highway at high speeds for long periods of time. Some allege that the G159 was prone to overheating which directly resulted in numerous fatal tire blowout accidents.

Without more information, it’s impossible to know if the tire is responsible or its driver. In point of fact, it’s much more likely that the driver shared at least some of the responsibility for this accident. Why?

We know that the motorhome is 20 years old. Hopefully the tires aren’t 20 years old, but even if they’re six or ten years old, they may be too old to drive on, even if their treads haven’t worn down yet.

Further, motorhomes aren’t the types of vehicles that you take out very often. Many folks mistakenly believe that they don’t need to change their tires because they have sufficient treads to drive on. Those who drive expensive sports cars during the summer months have the same sort of problem. The treads may be fine, but the rubber becomes more and more brittle over time, making it more likely that the tire will blow out.

If you’ve been injured in an accident related to tire failure, the Coral Gables tire defect attorneys at Halpern, Santos & Pinkert can file a claim on your behalf and recover damages related to your medical expenses, lost time from work, and reduced quality of life. Talk to us today to schedule a free consultation.