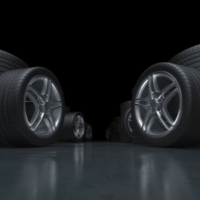 Let’s say you go to a baseball game and end up getting struck by a foul ball. Can you then sue the club for your injuries? As it turns out, the answer is no. Each fan in the stands is aware of the foul ball risk and can avoid injury by simply paying attention to the game. The underlying legal defense to such a claim is that the fans assume the risk of watching the game.

Would Nascar be able to use a similar defense to avoid a flying tire lawsuit? The answer should be ‘no’. Fans in Nascar race tracks do not assume that there is a risk that a flying tire will strike and kill them. Nonetheless, that’s exactly what happened at the Indianapolis 500 in 1987, the last time a fan lost their life at the Brickyard.

The year was 1987. Mario Andretti was the driver to beat. Al Unser, now in the twilight of his career, was called in as a backup driver after another driver suffered a concussion during practice. Andretti was leading the race until his car suffered an accident and he had to pull out. Unser became the improbable winner of the most prized trophy in Nascar.

Erstwhile, on the 130th lap, Tony Bettenhausen lost a tire on his racecar. The tire began rolling along the track until it was struck by another vehicle, sending it airborne into the stands. The tire struck Lyle Kurtenbach in the head and killed him instantly. Lyle and his wife Karen had traveled from Wisconsin to Indianapolis to watch the 500 for the tenth year in a row. They were sitting in the top row when the tire bounded into the stands. Their daughter was only a few seats away and bore witness to the event.

Lyle Kurtenbach was taken the speedway’s hospital, where he was revived for a few moments before being taken to a real hospital. He died before he got there.

Karen Kurtenbach filed a lawsuit against Bettenhausen’s race team and the U.S. Auto Club for $9 million. The case was settled under seal, so we don’t know the results of that lawsuit. Negligence was easily established. It works the same way for Nascar mechanics as it does for average drivers. If your vehicle malfunctions and causes an injury to someone else, you are responsible. Ultimately, those in the pit are responsible for improperly affixing the tire to the wheel, likely because they were under pressure to do the job as quickly as possible. Nonetheless, there are safety standards in place, even for Nascar, and those were not followed. The inspection should have revealed the issue prior to a fan’s death.

The Coral Gables tire defect attorneys at Halpern, Santos & Pinkert litigate cases on behalf of those who have been injured in a defective tire accident. Call today to schedule a free consultation and learn more about how we can help.