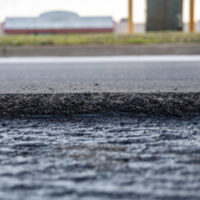 A road construction company just lost a $75 million lawsuit filed by the surviving children of a local guidance counselor. $50 million of the award was for punitive damages alone. Punitive damages are awarded when a company’s conduct is so egregious that it made fatality or injury inevitable. In this case, that seems to be exactly what happened.

According to the plaintiff, the company was awarded a contract to fix a road. However, after re-tarring the road, the company failed to “mill” the road (which is essentially filing it down). This left a ledge off the side of the road that was too high. When the deceased’s right tire came off the road, it triggered an accident with a flatbed truck resulting in the death of the driver. She was on her way to drop off her twin children at school.

The company, which takes government contracts for public roads and private contracts for private roads or parking lots, was contracted to pave the section of road where the crash occurred. Days before their project deadline, the company requested to skip milling the road. A project engineer affiliated with the state government said he allowed the company not to mill the road because the contract required a safety wedge being installed along the stretch that prevented such accidents. The failure to mill the road left the pavement 1.25 inches higher than it would have been had it been properly installed.

A judge dismissed lawsuits naming the truck driver and the company for which he worked. According to his testimony, his wheels left the road once before, but he managed to right the truck without incident. That did not happen the second time. The second time, both right tires dropped off the elevated pavement sending the truck airborne. The driver tried to over-correct, sending his vehicle into oncoming traffic.

The death occurred because the road had not been properly milled, and no safety wedge had been installed at the time of the accident. In this case, the road construction company contributed 100% of the negligence that led to the driver’s death. While lawyers for the plaintiffs named the trucking company and their driver in the lawsuit, personal injury lawyers tend to cast a very wide net until all of the facts of the case can be gleaned through the process of discovery. In this case, the allegations against the truck driver didn’t stick. It wasn’t his fault that the road was unsafe. In fact, if the truck driver were to sue the asphalt company for injury, he too would have a strong case.

Sometimes traffic accidents are caused by negligent drivers. Other times they are caused by shoddy roadwork. If you’ve been injured due to a traffic accident, call the Coral Gables tire defect attorneys at Halpern, Santos & Pinkert today to schedule a free consultation and learn more about how we can help.