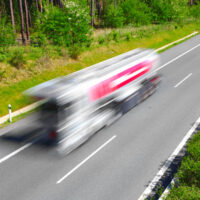 Two were killed after a semi-truck that was allegedly speeding crashed into a car carrying one driver and one passenger. Both driver and passenger were killed in the accident. The victims were a 23-year-old man and a 21-year-old woman. Their families have since filed wrongful death lawsuits against the company who employed the driver. Criminal charges are pending an investigation. According to the plaintiff’s attorneys, the truck was moving at 70 mph at the time of the crash. The speed limit on I-95 for semi-trucks is 60 mph. The area in which the accident occurred was under construction at the time of the accident.

The semi-truck driver rounded a curve near an exit but lost control of the vehicle at the curve. The semi-truck ended up tumbling over and crashing into a guardrail. The plaintiff’s car was absolutely mangled into the wreck. The cabin was entirely crushed into the flooring and the undercarriage was bent upwards as if the truck had attempted to drive over the car.

The driver was in a construction zone at the time of the accident, which meant that he would have had to slow down.

The issue for truck drivers is that they’re under the gun to make deliveries in a timely fashion. However, a delivery being a few hours late is a much better outcome than the deaths of two young people trying to enjoy their date night. Some trucking contracts have a language that includes late delivery fees which are paid by the trucker himself. These fines can be as high as $500, meaning that the truck not only won’t get paid for delivering the load, but will lose money from several other deliveries as well. $500 is a lot of money on a fixed income.

So truckers who are behind in their deliveries may see fit to irresponsibly operate their vehicles feeling the pressure of a large fine facing them. In fact, the system works to place truckers in a position where they are incentivized to speed.

In cases where truckers are incentivized to speed to avoid paying a fine that would cripple their finances for an entire week, the trucker is still on the hook for driving their vehicle safely, and they can face criminal charges in cases where they don’t. Prison time for truckers causing fatal accidents is not unlikely. So truckers are between a rock and a hard place.

While the government doesn’t necessarily want to get involved in contracts involving private entities, certain provisions that result in accidents need to be looked at more thoroughly. While we don’t know for sure what the case was with this individual trucker, truckers should not be punished for failing to break the law and schedules can be unpredictable.

The Coral Gables tire defect attorneys at Halpern, Santos & Pinkert litigate cases on behalf of drivers injured by negligent truckers. Call today to schedule a free consultation and we can begin preparing your case immediately.