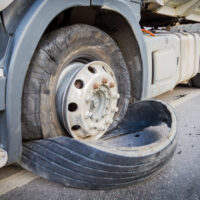 The family of a man who lost his life after a tire blew out on a commercial has filed a wrongful death lawsuit against the driver and his company alleging negligence led to the motorist’s death. Among the allegations, the plaintiffs claim that the company has no proof that the vehicle was ever inspected prior to being driven off the property as would be expected when a large commercial truck is placed on public roads. The plaintiffs contend that the driver would have noticed the tire issue before it occurred had the inspection been properly performed.

A second element of the plaintiff’s case involves the driver who was an auto auction employee with no qualifications to drive a commercial truck. The truck was en route to an auction house for sale.

The plaintiff was a former attorney and his law partners are trying the case for his wife and his estate, adding an element of intrigue to the case. While doctors won’t operate on their close friends and family, lawyers can harness their emotions to deliver stronger and more impassioned arguments.

Serious problems for the defendants

The defendants are in just about the most awkward position you can be in if you’re a civil defendant in a trucking accident lawsuit. They’ve essentially committed a trifecta of infractions that make any defense to the lawsuit nearly impossible. The trifecta is listed below.

Ordinary negligence is when you make an unsafe lane change. Gross negligence is negligence that is so severe that it makes death or serious bodily injury inevitable. When that tire blew out, anyone who was in the vicinity of the truck was in mortal danger. The truck began pulling into other lanes of traffic and eventually across the median and into oncoming traffic where it struck another vehicle head-on. The situation was avoidable but made inevitable by systematic failures at every level. Now, the people who cared about him are preparing a lawsuit against the company whose negligence took his life.

Most trucking companies provide indispensable services to the American public. But others shirk responsibilities under the law, take shortcuts, and lives are lost as a result. The Coral Gables tire defect attorneys at Halpern, Santos, & Pinkert hold those companies responsible for the deaths and injuries they cause. Call today to learn more.