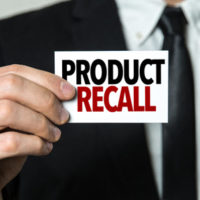 It seems like every week we’re talking about Takata airbags, even several years after it was discovered that their airbags had a faulty component that could cause the safety device to explode in the victim’s face. Several deaths occurred in the U.S., but even more have been reported worldwide. When it was discovered that the airbags were faulty, attorneys for the plaintiffs discovered that Takata knew about the problem and quietly settled lawsuits against it under a gag order. When several more individuals died without Takata initiating a recall, it kicked off one of the largest recalls in auto part history and one of the largest judgments ever levied against a corporation. Takata was on the hook not only for several wrongful death lawsuits, but the court saw fit to levy punitive damages against the company for failing to report the problem when they became aware of it. Takata now exists as a shell corporation the basic function of which is to settle lawsuits from whatever is left of their assets. Yet they’re still causing trouble, even today.

The Latest in the Takata Scandal

Recently, GM announced the recall of hundreds of thousands of vehicles fitted with Takata airbags. GM tried to argue that the airbags that their vehicles had did not have the same problem as the recalled airbags. However, GM’s foundation for this belief was Takata’s own assurances and thus the federal government ordered the recall anyway, not trusting Takata’s word.

Volkswagen will now also recall 105,000 Beetles to replace Takata airbags. Among the recalled vehicles are 2011 to 2014 Beetles.

Should I Be Worried?

The issue with Takata airbags was related to the small explosion that causes the airbag to inflate. Over time, the chemical that creates the explosion can degrade making it potentially explode in the driver’s face. If you are currently driving a 2012 to 2014 Beetle, you should be more worried if you live in hot or humid climates that can accelerate the degradation. But yes, since these airbags have a death toll of 25 (and counting), you should have your vehicle serviced at your earliest convenience. While it is unknown if the second generation of Takata airbags has the same problems as the ones that caused the largest lawsuit in auto history, you’re better safe than sorry. Since Takata’s word on which airbags are safe cannot be trusted, the U.S. government has taken the position that all potentially impacted vehicles should have their airbags replaced. Volkswagen will replace the airbags at no cost to customers, and customers will have the peace of mind of knowing that their airbags won’t explode in their faces.

If you’ve been in an accident and a safety feature did not behave the way it should have, you are entitled to recover damages related to your injuries. The auto manufacturer is liable for placing a defective product into the stream of commerce. Call the Coral Gables tire defect attorneys at Halpern, Santos & Pinkert today to set up a free consultation and learn more about how we can help.