Ambulance Tires Blow Out in Virginia 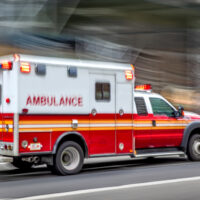 A patient in the back of the ambulance alongside the EMT who was caring for him remember first hearing a loud noise like a shotgun blast. The ambulance suddenly jerked left. The driver was able to successfully maneuver the vehicle to the shoulder of the highway.

Less than two weeks later, another similar incident took place. This time, those inside the ambulance were not so lucky. A different ambulance suffered a nearly identical tire blowout. One EMT was seriously injured. The EMT has been released from the hospital and is currently recovering at home.

The most likely scenario here is that the tires were simply old. Even if you leave a car in your garage for several years, a tire blowout can happen simply because the rubber in the tire has hardened over time. While these tires may still be covered under the tread warranty and have enough tread to not cause alarm, driving on these tires is dangerous.

Most ambulance drivers would not, for instance, know how old a tire is. Since both of these tires blew out on reserve vehicles that likely hadn’t been used often, it’s easy to assume that the tire was no longer roadworthy. The rubber had hardened to the point that it became brittle enough to explode. This resulted in catastrophic tire failure in the front part of the vehicle.

In the first accident, the ambulance driver was able to drive through the blowout (which is no easy task). It requires that you know exactly what you’re doing as many of the best methods of surviving a tire blowout are counterintuitive.

In most cases, the driver will attempt to turn against the direction that the vehicle is pulling. This can cause the vehicle to flip over. Instead, you want to straighten out the wheel. Additionally, it’s not a good idea to break after a tire blowout. You want to gently increase the gas and allow the vehicle to roll to a stop.

In this case, the ambulance company or hospital would likely be liable for any injuries related to the tire failure. They have a duty to ensure that the tires are roadworthy before taking them out on the road. That means ensuring that they’re not too old to drive on and replacing them every five or six years.

If you’ve been injured in a defective tire accident, the Coral Gables tire defect attorneys at Halpern, Santos & Pinkert can help you recover damages for your injuries. Talk to us today for a free consultation.