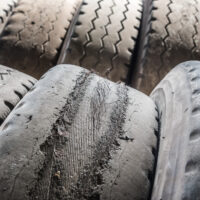 Six lives were changed and one was taken after a Volkswagen Jetta struck a box truck in Michigan recently. According to authorities, there were three factors that played a major role in the accident. Firstly, they believe that the driver was high on marijuana at the time of the accident. They also believe that he was driving too fast for the rainy conditions. Lastly, the treads on his tires were so worn down that the man had not a prayer in the world of stopping in time.

You don’t have to be on marijuana to die in this sort of accident. The treading exists to help the tire grip the road. When the treads have been worn down after years of driving, they produce far less friction. This can easily result in the car skidding out on turns, not stopping in time, or simply blowing out.

One of the many advantages of tires with treads on them is that they channel water from underneath the tires out. When a tire’s treads are completely worn down, there’s nowhere to channel the water. The effect of this is that the car will hydroplane on slick roads.

According to authorities, the front tires of the Jetta were nearly bald. They had worn way past the wear bars on the treads and were, in fact, illegal to drive on.

Liability in This Accident

Even if the tox screen does not come back positive for marijuana, this driver is in a lot of trouble. Drivers are expected to be aware of the laws regarding vehicle safety and ensure that their vehicle is roadworthy before they take it out on a trip. In this case, the mere fact that the treads were worn past the wear bars means that they are 100% liable for this accident, one death, and five other injuries.

If you believe that your tires are starting to wear down, you can perform a simple test in order to know for sure. Take a penny and stick it into the treads of your tire. If the tire is covering any part of Honest Abe’s head, then your treads are fine, but if you can see all of Abe’s head, then your tires are worn out. The next trip you take should be straight to your favorite tire supplier to have them replaced. You should avoid highways on your way there.

You have to take care of your tires. But if you did what you were supposed to and they still failed, then you may be able to sue the tire company. Talk to the Coral Gables tire defect attorneys at the office of Halpern, Santos & Pinkert today for a free consultation.