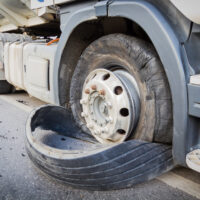 Two died in a crash on the I-71, one of whom was Karen Stutrud of Oregonia. She was the fiscal officer of Washington Twp. The crash that took one other life shut down the highway in both directions. The other fatality was Timothy Brown Sr. who was 55 years of age.

The crash occurred in the afternoon. According to investigators, a semi-trailer sustained a blowout of the front driver’s side tire resulting in the accident. The driver, Sam Hussein of Columbus, veered across the median and into oncoming traffic. Hussein’s semi struck another semi and Stutrud’s vehicle head-on. Timothy Brown Sr. was the driver of the other semi. Hussein and one passenger were treated for non-life-threatening injuries. Hussein is not suspected of driving while under the influence of drugs or alcohol.

Tractor-trailers experience tire failure far more often than most commuter vehicles. This is due in large part to the weight that they haul. When trucks leave on delivery, the trucking company is required to make sure that the truck is roadworthy. Drivers of individual trucks are expected to inspect the truck every 24 hours.

For the two individuals who lost their lives in the accident, it is unlikely to give their families any relief.

Tire failure accidents generally happen when the trucking company does not adequately inspect their tires before allowing the truck out on delivery. The tires are an integral part of the diagnostics that are supposed to be performed prior to leaving. These tires are required to haul loads of over 20,000. So if the tire was underinflated, overinflated, or simply just old, it is highly probable that a catastrophic tire failure would occur during the delivery.

In a case like this, an attorney would file a lawsuit naming both parties as defendants and letting the facts of the case sort themselves out. If the tire manufacturer produced a roadworthy tire but it was poorly maintained, then the families could go after the trucking company. If the trucking company recently purchased the tire or was under the impression that it was functioning properly, then chances are, it’s the tire company’s fault.

If you’ve been injured and tire failure was implicated in the accident, you may be able to recover damages from the trucking company, the tire manufacturer, or both. Talk to the Coral Gables tire defect attorneys at Halpern, Santos & Pinkert today to set up a free consultation.