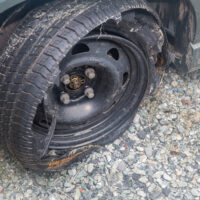 Three people died recently after a tire blowout resulted in a head-on collision. The blowout caused the vehicle to veer off course into oncoming traffic and collide with an SUV in Sumter County. The Florida Highway Patrol said that a 48-year-old woman driving a Chevy Blazer had her front left tire blowout on State Road 50. She lost control of the vehicle, crossed the center line, and hit a Ford SUV head on. A 49-year-old man also in the SUV died as did the driver of the Ford SUV. A fourth woman is in serious condition following the crash.

In cases like this, an investigation will be launched into the cause of the tire failure. Typically, these are not conclusions that are made by the Florida Highway Patrol. There could be any number of reasons for the tire failure.

The question is: Do the families of the deceased have a cause of action against the tire company? While there’s no real way to know at this point, it is certainly possible. In a case like this, the plaintiffs will try to build a case that the tire failed as a result of a design or manufacturing defect while the tire company will attempt to claim that there was any other factor involved.

This can include, but is not limited to, poor maintenance on the part of the driver whose tire failed. It can also include some failure on the part of a tire installer or the installation of a tire that the auto shop knew or should have known was defective. Dangerous road conditions can also be responsible. And lastly, the tire itself may have been defective.

Assuming that the Chevy Blazer was made in the past few years, the car should have had telemetry related to the tire pressure. If the tire pressure was within expected limits, that would rule out inflation problems.

Generally, when a tire company defends itself against a defective product claim, they will say that the driver of the vehicle allowed the tire to either become under or overinflated. Both under and overinflated tires create potentially dangerous situations.

There is also a chance that the tires were old, stripped, and no longer road-worthy. If that is the case, the owner whose tire blew out would still be responsible for the crash for taking the road with a tire that they should have known could blow out at any time.

The last question to be answered is whether or not the tire installer contributed to the crash. If the tire was newly installed, there may be a case against the company that installed the tire. If not, then (by exclusion) you’ve implicated the tire manufacturer for the crash. Analyzing the tire itself may provide more information as to why it failed.

If you believe a tire defect contributed to an accident, talk to the Coral Gables tire defect attorneys at Halpern, Santos & Pinkert today for a free consultation.