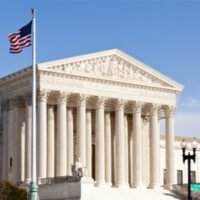 There is a lawsuit now on the SCOTUS docket that could have a far-reaching impact for the legal rights of American consumers. The lawsuit, Bandemer v. Ford Motor Co. was set to be heard in April before being delayed by the coronavirus quarantine.

Essentially, Ford is hoping to prevent consumers from filing lawsuits in their home states or the states in which they were injured, forcing injury victims to file lawsuits in Ford’s home state of Michigan. The lawsuit is related to a number of Ford vehicles that plaintiffs said contributed to the deaths of family members or severe injuries.

Ford has argued that consumers purchased the vehicles out of state, but suffered accidents in their home state. The plaintiffs filed lawsuits against Ford in their home state and Ford has been trying to argue that the hometown courts don’t have jurisdiction over these cases.

The plaintiffs contend that Ford should be forced to face lawsuits in states in which they market their vehicles.

Minnesota resident, Adam Bandemer, alleges that an airbag malfunction resulted in permanent brain injury. The question that the Supreme Court will have to answer is whether or not the plaintiffs are allowed to file their lawsuits in their home states against Ford or whether or not the lawsuits must be filed in Michigan where Ford is based.

Forcing the venue to another state is a great deal more work for attorneys. In this case, even the question as to whether the case should be moved to a new venue in Ford’s home state. This lawsuit was consolidated with another one from Montana. In both cases, the customers purchased vehicles outside of the state in which they reside.

Ford wants to say that since there is no (or a limited) connection to the venue, district courts don’t have jurisdiction to preside over such cases.

The case is still on the docket and verbal arguments have been postponed while America grapples with the new reality of the coronavirus. But this decision could have a far-reaching impact on those who purchased their vehicles out of state. It’s no small matter to file a lawsuit in another state. It costs time, money, and you may need an attorney who is familiar with the laws of that state, so one might not be immediately accessible to you.

Ford’s argument is largely a jurisdictional technicality aimed at those who have purchased vehicles out of their home states. Ford hopes that forcing the venue into Michigan will deter more injured victims of defective auto parts from filing lawsuits against the companies that produced them.

If you’ve been injured and a defective auto part contributed to your injury, you are entitled to file a lawsuit against the manufacturer. Call the Coral Gables tire defect attorneys at Halpern, Santos & Pinkert today to schedule a free consultation and learn more about how we can help.