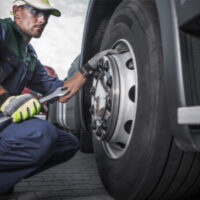 Have you ever wanted to drive an orange hearse with eleven (no seriously) tires? No? Well, that explains why this beauty never made it to any dealership lots. The vehicle in question is a 700 horsepower Citroen PLR. The PLR stands for poids lourd rapide, a French term translating simply to “fast truck”.

The Citroen PLR was built by a team of Michelin engineers in 1972 to test commercial truck tires. There are ten tires visible to the outside world and another spot for even larger tires tested within the main cabin.

About the Citroen PLR

Citroen is famous for crafting cars that look a little too much like hearses, but the PLR was even more like a hearse thanks to its 23-foot wheelbase.

The engine is composed of two GM small-block V8 engines. These engines were used to move Corvettes. Since the Citroen has two of them, it manages to get double the horsepower of a standard Corvette even though, unlike the Corvette, its curb weight is somewhere in the range of 21,000 pounds. This required five vertically-stacked radiators to keep those engines cool and the vehicle’s airflow was engineered to direct air to the radiators. The monstrosity could reach speeds of 111 mph. However, it ate through gas like the worst vehicles of the era quite quickly, so engineers were required to install a 23-gallon fuel tank.

The ten tires used to propel the vehicle forward had their own engine. But a second engine was used to power the 11th tire, the truck tire that was being tested.

A vehicle with this much customization costs a lot of money to design and build. Michelin, of course, was worried that a tire blowout could end their creature and require them to start from scratch. For that reason, they protected the test tire inside the vehicle’s cabin itself. This way, if a blowout did occur, the driver would not lose control of the vehicle. If the test tire did blowout during testing, there was a large fender to prevent shredded rubber from showering the driver.

The vehicle itself is no longer used by Michelin to test tires. Today, they use advanced treadmills to test wear and tear and tread life. However, it stands as a major piece of the company’s history and its commitment to ensuring its tires are safe for the roads.

Injured in a Vehicle Accident?

If you’ve been injured in a traffic accident, call the Coral Gables tire defect attorneys at Halpern, Santos & Pinkert today to schedule a free consultation and learn more about our services.